Everyone knows we’re supposed to get 10,000 steps a day, right? We’ve heard it so much it must be true. If you have an activity monitor like a Fitbit, each day begins with a goal of 10,000 steps. That’s a lot of steps for someone who might normally walk 3,000 steps per day.

Here’s what you may not know. The 10,000 step-per-day mantra didn’t begin as a scientific recommendation. It began in Japan in the 1960s when pedometers were sold under the name “10,000 steps meter.” Soon Japanese walking clubs formed with a goal of walking 10,000 steps per day, and the goal became a business slogan more than 30 years ago.

Walking 10,000 steps a day is not an official recommendation of any major health organization. In fact, major health organizations like the Centers for Disease Control and Prevention adhere to the 2008 Physical Activity Guidelines for Americans, which recommends 150 minutes of moderately intense physical activity every week. That’s about 30 minutes a day, five days a week, which is what we’ve been recommending to our clients for a long time.

If you’re into counting steps and you want to improve, it’s important to start where you are and gradually improve from there. Add 1,000 steps a day for a week, working your way up to 8,000 steps over several weeks. And if that doesn’t work, then find what does work for you. Remember the most important thing is to increase your activity beyond your current level, and set a final goal of at least 8,000 steps a day. 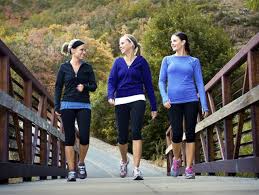 One recent study prosed an index of step counts based on currently available information:

Do you have to count steps? Not at all, but it seems like almost everyone these days has a smart phone or an activity monitor. If you’re not interested in counting steps, just focus on getting at least 30 minutes of moderate physical activity at least five days a week. You should be able to carry on a conversation during the activity for it to qualify as moderate. Also, if you can’t get in a continuous 30 minutes, shoot for several sessions of 10 minutes or more.

The weather is perfect for walking right now, so get outside and get after it.