How Long Does It Take To Start a Habit? 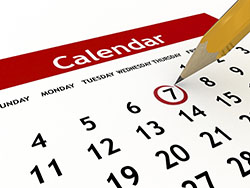 I’ve often told clients, and even written in our nutritional program, that it takes 21 days to start a habit. Everyone knows 21 days is the magic number. Right? To be honest when I wrote our healthy habits nutritional program 6 years ago, I spent a lot of time trying to figure out where the 21-day rule came from. I got every book I could find on the subject of habit formation (which weren’t many), and I scoured the internet. I found many claims that it takes 21 days to start a habit, but I couldn’t find any scientific evidence to support the fact. After a while I finally gave up and went with the popular notion that 21 days is the magic number to change anything in your life. In other words, I finally just gave in to conventional wisdom and believed in the magic of the Tooth Fairy.

In the last few years, a good deal of research has been conducted in regards to how habits form and how you can change them. Psychologists define habits as learned behaviors that happen automatically when we encounter a situation in which we’ve repeatedly done those actions. Habits, scientists say, emerge because the brain is constantly looking for ways to save effort.

Our brains like to take a sequence of actions and convert them into an automatic routine. For instance, tying your shoes is a sequence of complicated motor skills that you do everyday without thinking about the individual steps involved. This automation, if you will, of certain activities is stored in the basal ganglia of your brain. That’s the area of your brain that plays a key role in the development of emotions, memories and pattern recognition.

You make decisions and think consciously in a different part of your brain called the prefrontal cortex. Habits allow the decision making part of your brain to work less, which means you can tie your shoes and carry on a conversation with your spouse at the same time.

So let’s say you want to start a new habit like going for a walk every evening after dinner. How long will it take to develop this habit? Is it 21 days or is it longer.

It turns out no one ever really knew where the 21-day rule came from. Everyone just went with it. Kinda like the whole waiting an hour after you eat to swim thing. It appears that the ‘21 day’ number came from the 1960 book ‘Psycho-cybernetics,’ by Dr. Maxwell Maltz. In his book, Maltz, a plastic surgeon turned psychologist, claimed you could create or break any habit in just 21 days. He made this claim based on the fact that he observed that it usually takes plastic surgery patients 21 days to adjust to their new faces. His claim was based on anecdotal evidence.

Maltz further stated, “Many commonly observed phenomena tend to show that it requires a minimum of about 21 days for an old mental image to dissolve and a new one to jell.” (pp. xii-xiv) Later in his book, he stated, “Our self-image and our habits tend to go together. Change one and you will automatically change the other.” (p 108)

Readers of Maltz’s book must have reasoned that if self-image takes 21 days to change, then habit formation must take 21 days. Since then, readers and non-readers of Maltz’s book have made the claim that doing something for 21 days will magically cause a new habit to form. Just do a Google search for ‘21 days’ and you will find plenty of claims that almost anything can be accomplished in 21 days.

So how long does it really take for you or me or anyone to start a new habit? Researchers at University College London, recently conducted an enlightening study on habit formation. Participants performed a self-chosen, health-promoting dietary or activity behavior, like drinking a glass of water, in response to a once-daily cue, like after breakfast, and gave daily self-reports of how automatic the behavior felt. On average it took 66 days for the participants to start a habit. (That’s March 6 if you are attempting a New Year’s resolution).

Another interesting result of the study was the amount of variation. Even though 66 days was average, the number of days for habit formation varied wildly from 18 days to 254 days. So, there really isn’t a magic number, just an average.

“Missing one opportunity to perform the behavior did not materially affect the habit formation process.”

What this means is, if you miss a day in trying to start a new habit, don’t put yourself on a guilt trip. Just keep trying; you’ll eventually get there.

So whether you are trying to eat 4 servings of fruit everyday, or walk 20 minutes a day, keep trying. You will eventually get there. And don’t get discourage if it takes more than 66 days.