Is Salt Really Bad for You?

Your doctor told you to cut back on salt. But did your doctor tell you what that means and how to do it? Most of us think that means getting rid of the saltshaker (there goes the flavor of my home-grown tomatoes). Is that the right thing to do?

People have used salt for thousands of years to preserve and season foods. Salt made it possible for our ancestors to travel long distances. Ancient cultures highly valued salt. Cities and roads were built around the salt trade. Many cultures used salt as currency. Can it really be that bad for you? 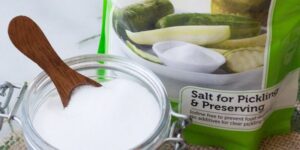 Salt is a combination of two minerals, sodium and chloride, both of which have important functions in your body. Your kidneys regulate your body’s sodium level, which helps control your body’s fluid balance. It also sends nerve impulses and helps muscles function properly.

When your bloodstream contains extra sodium, it pulls water into your blood vessels, increasing the total volume of blood. Your kidneys will then adjust by producing more urine and excreting more salt. This transient process will temporarily increase your blood pressure: but does it cause hypertension and increase the risk of premature death?

So, here’s the salt paradox: for thousands of years, we’ve used salt to preserve and enhance the flavor of the foods we eat. Your body requires sodium to function properly. Now we are being told that we need to limit the amount of salt we consume to prevent hypertension that could ultimately lead to a heart attack and pre-mature death. But heart attacks were not prevalent as a cause of death until about 100 years ago.

How could the saltshaker suddenly become so deadly? Maybe it’s not. It turns out that only about 10% of the salt we consume comes from the saltshaker, and 77% comes from packaged, prepared, and restaurant foods. A study published in 2016 found that 58% of Americans’ calories come from “ultra-processed foods.” These foods are typically high in sugar, sodium, and industrial seed oils. They also contain chemicals not generally used in cooking, such as flavorings, emulsifiers, and additives designed to mimic real food.

Some of these processed foods contain an entire day’s allowance for sodium based on the common metric mentioned earlier of 2,300 mg of sodium a day. For example, a 10.5 ounce can of Campbell’s Chicken Noodle Soup contains 2,225 mg of sodium.

Another problem—some of the processed foods that contain the most salt don’t even taste salty. Most breads have a lot of salt, but you wouldn’t even know it.

And look at vegetables. A half cup of fresh green beans contains about 6 mg of sodium. Those same beans, when package in a can, contain 300 – 400 mg. All canned vegetables compare similarly.

We need to consider a couple of issues when it comes to salt intake and limiting sodium in our diet.

First, heart disease became a real issue about the same time we started consuming ultra-processed foods. Those foods contain a lot of sodium, but they also contain lots of substances that cause obesity. Crisco shortening, one of the worst processed seed oils, was introduced in 1911. (Proctor and Gamble marketed Crisco as vegetable oil, but they originally made it from cottonseed oil.) Sugar consumption also ramped up dramatically at the turn of the century. And the grains we consume have become so industrialized that we can’t even eat them until they are highly processed.

So, it may not be the sodium causing the hypertension. It could easily be one or a number of things we introduced to our diet since the beginning of the 20th century. In fact, researchers really haven’t made a clear connection between salt intake and hypertension.

Second, if you want to keep your sodium in check, look at the processed and ultra-processed foods you eat. It’s almost impossible to calculate the total amount of sodium you consume in a day because so much of it is hidden in processed foods.

To further complicate matters, there’s also still a lot of speculation about the standard guidelines for salt intake.

One thing we can all agree on: our modern diet contains too much salt for most people. So let’s look at some strategies for keeping your sodium intake in check. 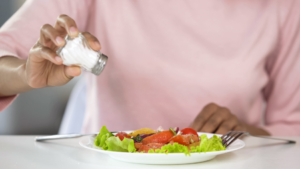 This very simple set of guidelines will help you keep your sodium in check, allowing you to use a saltshaker occasionally on your favorite vegetables (like tomatoes).

You may have noticed that many of our recipes call for salt. That’s because we’re assuming you’re doing everything you can to limit ultra-processed foods.

Sorry to muddy the waters for you. Bottom line—use common sense. Avoid processed foods at all costs. If you do that, you can afford to pick up the saltshaker now and then. Remember, you need SOME salt. Eliminating all salt from your diet can be as unhealthy as getting too much.

As a final note, if you have high blood pressure, follow your doctor’s advice regarding sodium intake.