It’s Time to Grow a Mustache

November is men’s health month. And it’s the perfect month to bring awareness to men’s health because it’s also a great time of the year to grow some facial hair.

The men’s health movement, known as Movember, started when a couple of guys decided to challenge their friends to bring back the mustache. Before long, they had 30 friends involved in their challenge. Inspired by one of their mothers who was raising money for breast cancer, they decided to use their effort to grow facial hair to raise money for prostate cancer. Each friend donated ten bucks—the movement began. 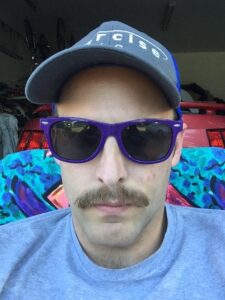 Since 2003, Movember has funded more than 1,250 men’s health projects. They’ve given more than $2 million to world class research teams in the United States to fast-track new prostate cancer treatments. The movement is important because, on average, men die five years earlier than women for largely preventable reasons.

Since its humble beginnings, almost seven million people have participated in Movember. It’s also expanded to bring awareness and support to three of the most prominent threats to men’s health—suicide, prostate cancer, and testicular cancer.

Globally on average, one man dies by suicide every minute of every day. In the US, the male suicide rate is alarmingly high: men account for four in five suicides. The rate of suicides in the US increased four percent from 2020 to 2021, after two consecutive years of decline in 2019 and 2020. Males ages 15 to 24 experienced the sharpest increase at 8%.

The pandemic created a myriad of mental health issues: isolation, fear, stigma, abuse, and financial stress. This stress seems to have affected young men more than older men. A study by the CDC found that nearly 20% of US high-school students said they seriously considered suicide in 2021.

While the pandemic may have ended, the scars remain. Many men still suffer. When men have problems, especially emotional problems, they are usually afraid to reach out or feel like they have no place to go for help. Seventy percent of men say their friends can rely on them for help, but only 48 percent say they can rely on their friends.

While most men act like they have it together, in truth a lot of men struggle emotionally and mentally. As evidence, binge drinking increased by 21 percent last year. Researchers predict that this kind of sustained increase in alcohol consumption for more than one year could increase mortality rates by 19-35 percent.

Movember has a goal of reducing men’s suicide rates 25% by the year 2030. One of their initiatives is providing a wealth of resources for men who struggle. They also provide some valuable resources for spotting a bro who’s feeling low. Also, if you know someone who is depressed and you just don’t know how to help, check out Movember Conversations.

We have also written about a few ways to reduce stress, and they’re applicable stress-reducing techniques during a pandemic or any other time. 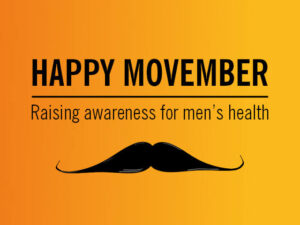 Your risk of developing prostate cancer increases with age, but that doesn’t mean the disease only affects older men. African American men and men who have a family history (a brother or father with prostate cancer) are 2.5 times more likely to develop prostate cancer.

The key? Early detection. The difference between early detection and late detection can determine life or death. Across the globe, more than 3 million men live with the disease. Many deal with serious side effects from treatment.

Testicular cancer accounts for the most cancer diagnoses in young men in the US. The survival rate for testicular cancer is 95%. But sadly, for some young men, long-term-treatment-related side effects severely compromise their quality of life. Movember focuses on getting these predominantly young men back to living full, healthy lives.

Top Five Things to Know and Do 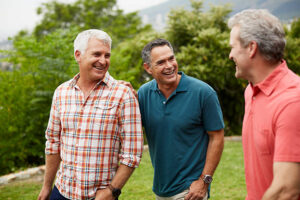 It’s not too late for you to join the Movember movement and raise or donate money for men’s health. You can participate in several ways, even if you don’t want to grow a mustache. (I want to, but my wife disapproves, and I’ve learned to pick my battles.)

Move for Movember serves as a great alternative way to participate in raising awareness for men’s health. Commit to running or walking 60 miles over the month, at your own pace. That’s 60 miles for the 60 men we lose to suicide each hour, every hour across the world.

Whatever you choose to do this month, for the sake of the men we love (sons, brothers, husbands, fathers, friends) let’s do what we can to help those men live longer, healthier lives.