Less (but more intense) workouts = Better Health. That was the title of the forwarded email I received a couple weeks ago from a good friend. The email had been sent to her from a public relations consultant at IU Health, in regards to a new research finding: weekend warriors who cram 150 minutes of moderate intensity or 75 minutes of vigorous intensity physical activity into one or two days a week lower their risk of mortality just as much as people who go to the gym five days a week. Of course, my friend thought of Exercise Inc when she read the email. 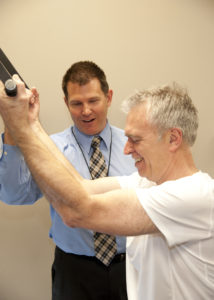 The study was a pooled analysis of 64,000 adults. The researchers looked at data on middle-aged adults who responded to a government-sponsored household survey conducted from 1994 to 2012. The survey included questions about health history and fitness habits. The researchers then cross-referenced this information with health department death records.

This study didn’t classify the type of exercise, so the participants could have been doing anything—mountain biking, skiing, running, or lifting weights. The important fact about the study is that folks who exercised once or twice a week had the same reduced risk of cardiovascular disease and cancer as people who exercised 3 to 7 times a week.

This is great news for us at Exercise Inc! Our recommended exercise schedule is a 20-minute workout once a week and 20 to 30 minutes of walking 5 days a week. We know many of our clients don’t get their 5 days of walking in, but that has not prevented them from making changes in their blood pressure, cholesterol and blood sugar.

The more we learn about exercise, the more we understand that intensity is the key. And at Exercise Inc, we make sure the intensity is where it needs to be for our clients to change many of their medical biomarkers. The great thing about our program is it’s safe enough for your grandmother, but we can make it intense enough to bring anyone to their knees. (Yes, we’ve done it.)

So as the title suggested, less can be more, especially when the less is 20 minutes of high intensity strength training.