Turmeric and It’s Effect on Your Health

Somewhere in your spice rack there’s probably a bottle of turmeric, the bright yellow member of the ginger family that’s often referred to as Indian saffron. Its horizontal root system is dug up, baked, and ground into a powder, which has been used throughout the middle east to flavor foods. Pretty much every curry dish you encounter has a healthy portion of turmeric. It livens up just about any food with a unique flavor that is slightly bitter and a bit spicy, with a mustard-like scent.

Curcuminoids are the active components of turmeric, the most prominent of which is curcumin. It has powerful anti-inflammatory effects and is a very strong antioxidant, giving it the potential to be considered in the development of cancer preventive strategies. But, that’s just the beginning. The potential medical benefits of this ancient herb seem to be endless. Let’s examine some of the top health benefits of turmeric and extracts of turmeric (curcumin) to see if this herb might be beneficial for you.

Turmeric and Curcumin as an Anti-inflammatory 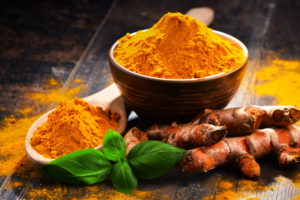 Turmeric is most widely used for treating aches and pains associated with inflammation. Its strong anti-inflammatory effects have made it useful as a treatment for headaches, upset stomach, heartburn, and skin conditions (used topically). Research has shown that turmeric can be especially effective for some of the most prominent inflammatory conditions.

Osteoarthritis – Patients with osteoarthritis showed improvement in pain, physical function and quality of life after taking curcumin. And it wasn’t just their imagination. Osteoarthritis has an underlying inflammatory cause, which contributes to the loss of chondrocytes (cartilage cells), leading to diminished cartilage layer in affected joints. In lab studies, curcumin actually prevented the destruction of chondrocytes by blocking and deactivating inflammatory agents.

Rheumatoid Arthritis – Patients with rheumatoid arthritis were given either 500 mg of curcumin a day or 50 mg of a non-steroidal anti-inflammatory (diclofenac sodium). Those who took curcumin improved their ability to function in daily living more than those who took an anti-inflammatory drug. The curcumin group also had a greater reduction in swelling and tenderness of joints. More importantly the study found curcumin to be safe without any adverse effects.

Laboratory studies have shown that curcumin has great promise in cancer prevention and/or therapy. It has been shown to have the potential to mitigate or prevent many different types of cancers, including multiple myeloma and colorectal, pancreatic, breast, prostate, lung, head, and neck cancers.

Curcumin has been shown to stop the growth of abnormal cells and cause damaged and potentially cancerous cells to self-destruct. It has been shown to have this effect on every type of cancer cell throughout the various tissues of the body.

Curcumin has proven to be particularly effective in inducing breast cancer apoptosis (where cancer cells destroy themselves).

*Please understand that we are in no way suggesting turmeric or its extract curcumin should be used as a treatment for cancer. Clinical trials are currently being conducted to investigate the effectiveness of curcumin as a treatment for all sorts of cancers. However, if your family has a history of cancer, you may want to consider turmeric supplementation as a preventative. 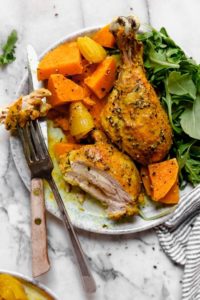 There is a good deal of research indicating that curcumin can help prevent age-related cognitive decline. Sustained low doses of curcumin have been shown to reduce beta-amyloid plaques, which are the hallmark of Alzheimer’s disease. Also, incidence of Alzheimer’s disease is lower in regions where turmeric is commonly used in cooking, like India.

How to Supplement with Turmeric

There are two primary ways that you can supplement with turmeric. You can use turmeric powders in cooking, or you can take a turmeric or curcumin supplement in capsule form.

Turmeric powder used in the kitchen adds flavor and color to all sorts of dishes.

Most of the research on turmeric has revolved around curcumin, which is the most active component of the spice. By weight, the curcumin content of turmeric powder is only 3%; that’s not much. The therapeutic dose of curcumin used in most studies is around 2 to 6 grams. It’s basically impossible to eat enough turmeric to ingest that amount of curcumin.

Because it’s difficult to get enough curcumin from turmeric powder, a lot of people turn to curcumin supplements. They are easy to find and not very expensive. Curcumin is not easily absorbed into your cells, but absorption can be greatly improved by combining with black pepper. Look for turmeric supplements that contain pepper or peperine (the active ingredient in black pepper).

As a general rule, 500 milligrams to 2000 milligrams (.5 grams to 2 grams) a day is a good wellness dose of curcumin for preventing inflammation and promoting gut health. Curcumin has been shown to be safe in doses as high as 12 grams a day for 3 months. High doses over long periods of time are not recommended since we don’t have any data on the long-term effects.

Also, curcumin is a potential anticoagulant, so anyone taking prescription anticoagulants should check with their physician before supplementing. 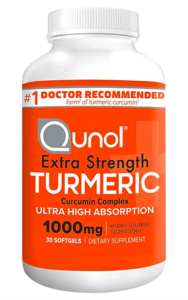 There are some specific brands of turmeric curcumin that we like and recommend. Thorne, Jarrow, and Now each make a very good Curcumin Phytosome (Meriva). The difference between a curcumin phytosome supplement and a regular curcumin supplement is bioavailability—that is, how curcumin is absorbed by your cells. In a human study comparing Meriva absorption to regular curcumin, Meriva was shown to have an 18-fold higher absorption rate than standard curcumin.

While curcumin is definitely the most prominent medicinal compound in turmeric, there are many others that contribute to health improvements as well. Incidence of cancer in India and other countries that use a lot of turmeric suggests that a low, regular dose could be beneficial.

If you are interested in the health benefits of this amazing spice, regular supplementation along with flavoring your foods may be the way to go. As always, if you are considering taking this supplement, consult with your physician first.