Why You Need More Than Six Hours Of Sleep

We’re just too busy to spend that much time in bed. The average American actually sleeps about 6.8 hours a night, but 40% of us sleep six hours or less. So maybe the best question to answer regarding sleep is what affect does averaging six hours a night have on your health, if any?

Let’s see what the research has to say about sleeping six hours or less every night.

Sleep and the Common Cold

A study published in the journal Sleep found that getting less than six hours of sleep greatly increased susceptibility to the common cold. A total of 164 participants were confined to a hotel, administered nasal drops containing rhinovirus, and monitored over seven days for the development of a clinical cold. Sleep was assessed using an Actiwatch activity monitor and sleep diaries. 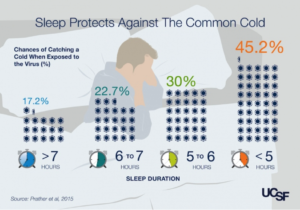 The percentage of participants developing a cold based on sleep time was as follows:

The study confirms what we know about sleep and its effect on immune response. Sleep deprivation greatly compromises your immune system’s ability to resist all types of illnesses. In fact, a single night with only four hours of sleep can cause a 70% drop in your natural killer cells.

You got your vaccine and you’re getting back out there. But too many of us depend on the vaccine to do its part without us doing our part. The purpose of a vaccine is to mount an immune response. This must happen cooperatively with everything else that’s going on in your body. Your immune system depends on you getting enough sleep to keep it healthy. If you’re not getting adequate sleep on a consistent basis, don’t count on a vaccine working at its full potential.

A sleep study conducted by the University of Pittsburgh found that people who sleep six hours or less per night were 11.5 times more likely to be unprotected from a vaccine than those who slept more than seven hours.

Sleep affects more than your health, a cumulative lack of sleep can be detrimental to your work performance, your ability to function at home, and even your relationships. The results from a sleep deprivation study show just how bad a cumulative lack of sleep can be. Subjects in a lab-based sleep study who were allowed to get only six hours of sleep a night for two weeks functioned as poorly as those who were forced to stay awake for two days straight.

The study, published in the journal Sleep, took 48 adults, and restricted their sleep to a maximum of four, six, or eight hours a night for two weeks; one unlucky group was deprived of sleep for three days straight.

When the participants were not sleeping, they were tested every two hours on cognitive performance and reaction time. They also answered questions about their mood and any symptoms they were experiencing. They were regularly asked, “How sleepy do you feel?”

As you would expect, those who got eight hours of sleep performed the highest on cognitive skills and reaction time. Subjects who got only four hours performed the worst. The group who got six did well until about the tenth day of the study.

In the last four days of the experiment, the subjects who only got six hours of sleep per night showed cognitive performance that was as bad as the people who weren’t allowed to sleep at all. Consistently getting six hours of sleep or less can be as bad on performance as not sleeping at all for two nights straight.

That makes sense because thirty-two percent of those who sleep six hours or less say they get as much sleep as they need. 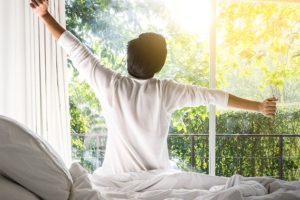 There’s plenty of evidence to show that your immune system and your performance need you to get more than six hours of sleep on a consistent basis. It also seems like seven hours might be the sweet spot. The average American comes in a little less than that at 6.8 hours. But that’s probably still not enough because most people overestimate sleep duration and underestimate minutes awake across the night. To make sure you’re getting at least seven hours of sleep, plan for at least seven-and-a-half hours in bed.

Here are a few simple tips to help you sleep better:

1. Stick to a consistent schedule. Go to bed and get up at the same time each day. Yes, that includes weekends and vacations. Make sure you get a minimum of seven hours each night.

3. Don’t eat anything within two hours of bedtime. Food in your gut will keep you from sleeping well. Also, drink most of your water early in the day and less at night.

4. Keep your room cool. A bedroom temperature between 60° and 67°F tells your body it’s time to sleep.

5. Exercise Regularly. Healthy people sleep better. Just don’t work out within an hour of bedtime or you will be too invigorated to doze off.

Stay Strong and Healthy (and get enough sleep),