Why You Should Consider Fasting

Hunger is a fact of life—at least it used to be. Before the arrival of pantries, fridges, supermarkets, Taco Bell and 7-Eleven, humans often had a hard time finding and keeping food. Hunger causes us to step up our game, sharpen our senses and appreciate times of plenty. By removing such a critical biological drive from our daily lives, we’ve dulled our senses and subdued our brains.

Our ancestors experienced persistent hunger. They didn’t have immediate access to food all the time like we do. They likely ate one or two non-balanced meals a day. And between meals, they didn’t head to the fridge or drive through Starbucks. 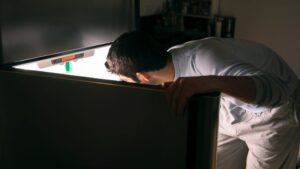 According to Sathcin Panda, a professor at the Sulk Institute, most of us start eating as soon as we wake up, and we don’t stop until we go to bed. One of Panda’s studies found that the average person eats in a 15-hour window. This all-day eating keeps a person’s hormonal response to food (particularly insulin) going all the time. Your pancreas ends up feeling as overworked as the Amazon driver.

We also snack a lot more than we used to. According to a study from the University of North Carolina, we snack 75 percent more than we did before 1978. And our snacks are 60 percent larger and more likely to be ultra-processed. We’ve become so addicted to snacking that we have the ability to buy a king size pack of Reese’s cups almost anywhere we go.

Since the 1970s, we’ve become totally disconnected with hunger. According to the NIH, these changes in eating habits in the late 70s kicked off the obesity epidemic that began in the 80s and rose dramatically in the 90s.

Hunger is important. And because we never feel hungry, we never optimize our health.

Depending on how much we eat, we fully metabolize our last meal after 12 to 16 hours. At that point, our bodies release testosterone, adrenaline, and cortisol. All these hormones signal your body to burn stored tissues for energy. But your body just doesn’t burn healthy cells when it’s running on empty—it gets rid of a lot of dead damaged cells.

For thousands of years, fasting has served an important role in religious and cultural practices. Just about every religious movement practices fasting, including Judaism and Christianity. Jesus fasted for 40 days. Socrates believed fasting could help prevent certain diseases. American doctors in the 1800s believed fasting could help prevent and fight diseases like cancer. Turns out, they were right.

In 1992, David Sabatini, a biologist at MIT, discovered what’s call the mTOR pathway, which he describes as a general contractor that signals the body to demolish old cells and replace them with newer healthier ones. The body’s old, damaged cells have all sorts of problems that are implicated in many of the diseases that end up killing us.

The mTOR pathway senses when your body is fed or truly running on empty. When you run on empty, mTOR signals your body to destroy old cells in a way that is rejuvenating and antiaging. Your body is ruthlessly efficient, and it culls the herd by consuming your oldest and weakest cells. Dr. Roberta Gottlieb, director of Molecular Cardiobiology at Cedars-Sinai Medical Center, refers to this process as your body’s way of “taking out the garbage.”

“Parts of our cells become damaged, and that’s the garbage,” says Dr. Gottlieb. If we never take out the garbage, it starts to pile up. We call our body’s process of taking out the garbage autophagy, which translates from ancient Greek as “self-devouring.” If you go without food long enough, mTor triggers autophagy and your body takes out the garbage by recycling damaged cells and making them into new ones. 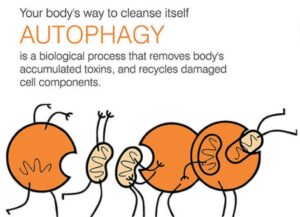 Autophagy typically happens when we sleep—because that’s when we’re fasting. Dr. Panda believes humans developed autophagy around day and night cycles, generating circadian rhythms. His research suggests that the body has programmed within it a code to crank up autophagy to repair and rejuvenate itself at night, after it burns through the day’s food.

Dr. Panda says our 15-hour daily eating windows disrupt the process. They rob our bodies of the 12 to 16 hours we need to fully metabolize food and turn on autophagy. Or as Dr. Gottlieb says, “If you eat a 30-inch pizza before bed, you’re not going to have any autophagy.” That means you’re not going to take out the trash, so the cells accumulate more and more debris.

Keeping cells in working order requires a little clean up once in a while. If junk builds up in a cell, it can permanently tweak the cell’s genes, making it difficult or impossible for the cell to repair itself and regrow the structures it needs to survive and thrive.

Most of the cells in your body only last a few days. But some of your body’s cells remain with you for a lifetime. Two very important cells that stay with us for decades and need to stay healthy include neurons (located in our brains and nervous systems) and cardiomyocytes (which make up our heart muscle).

Dr. Gottlieb’s current research looks at how autophagy can help protect the heart after heart attacks. A heart attack triggers a series of events that can damage heart cells over the course of months. She believes that getting autophagy in motion shortly after a heart attack can reprogram the heart to have some beneficial remodeling rather than long term damage.

Our 15-hour eating windows have also dulled our mental sharpness. In the long run, a lack of food can lead to a surge of energy. Our ability to function at a high level of physical and mental capacities helped our ancestors survive during lean times. We also use the word “hungry” for a reason to describe ambitious drive—a drive that comes from our animal instincts.

When we are truly hungry, our bodies respond with a cascade of hormones that causes us to burn fat and become more mentally alert. Eating all the time can prevent some of the heightened alertness we need to operate at our best.

Dr. Panda also states that research shows people sleep better when they stop eating a few hours before bedtime. I’ve been telling our clients for years that not eating anything for three hours before bedtime will help them sleep better. We now have research to back that up. And if you sleep longer and deeper, you’re likely to have more focus the next day. 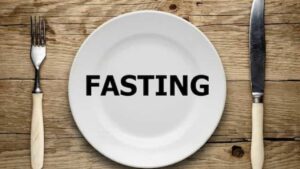 In a blog a few weeks ago, I spoke about the importance of time-restricted eating, which consists of restricting eating to a 12- to 8-hour window. Now, I want to encourage you to take fasting a step further. Consider, at least once a month, going for 24 hours without eating. If you’re already eating in a 12- to 8- hour window, you should find it fairly easy to fast for a 24-hour period.

The best way to start a 24-hour fast is to ease into it. Start with an 18-hour fast by skipping lunch or dinner. A week later, go for 24 hours by skipping breakfast and lunch. You only have to miss two meals. So, it’s actually not as bad as it sounds.

If that doesn’t work, try skipping lunch and dinner. Work at it until you find out which 24-hour window works best for you.

If you make it 24-hours, you’ll feel better and have more energy. You’ll also give your body a chance to take out the garbage.