Hippocrates and many other ancient Greeks believed that walking outside in fresh air and sunshine was “the best medicine.” We believe it still is. Getting out in nature—or just out your front door—to walk can improve your health in ways we don’t understand. That’s why you don’t see treadmills or “cardio equipment” at Exercise Inc. You gain more benefit from walking outside.

But how much should you walk? Well, for some reason, the mantra is 10,000 steps a day. Many activity trackers come with 10,000 steps as the default goal, but there is no real scientific evidence this number is any better for you than 9,000 steps. In fact, if you’ve ever tried to reach the 10,000 steps-a-day goal, you probably found yourself falling short quite often, which meant you probably threw up your hands and quit.

For most people, taking 10,000 steps a day is just not practical. The average American walks closer to 4,800 steps a day. Walking fewer than 5,000 steps a day is considered a sedentary lifestyle, which increases your risk of obesity, type 2 diabetes, cancer, cardiovascular disease, and early death.

But interestingly, a recent study of elderly women found that those who took about 4,400 steps a day had a lower risk of dying in the next several years than those who were more sedentary. The study followed 16,741 women for four years, who were on average 72 years old when they started the study. The participants were divided into four groups from least active to most active. Women in the group second from the bottom, who took about 4,400 steps a day, were 44% less likely to die in the next four years than women in the least active group who took 2,700 steps a day.

That study also found more steps per day progressively decreased mortality rates before leveling off at 7,500 steps a day. So, if you’re trying to walk enough steps to improve your health and live longer, 7,500 is enough. You really don’t need any more than that.

Walking speed made no difference. In other words, when two people took the same number of steps in a day, and one walked faster than the other, it didn’t really matter. What counted was the number of steps. 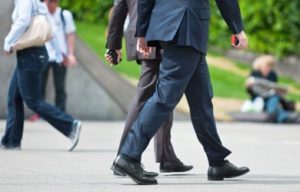 The fourth Habit in our Simple 9 program is Walk 30 Minutes or 7,500 steps a day. I originally wrote that because the American College of Sports Medicine states that pedometer step counts of 5,400 to 7,900 steps each day can satisfy the requirement of 30 minutes of moderate physical activity. Since pedometer step counts aren’t always accurate, I decided to go with a round number at the higher end of the count. Turns out my estimate was closely in line with the results of this research.

If your goal is to improve your health, and you are counting steps, go for 7,500 steps a day. Every little bit of extra movement counts. To reduce the harm of sitting all day, stand up every 30 minutes and move for at least one minute. Walk around your house, play with your kids, take the stairs and don’t drive to your mailbox. You’ll be surprised how quickly extra steps add up.

If you don’t want to count steps, set a goal of walking 30 minutes a day. If you can’t get in a continuous 30-minute walk, several intermittent walks of at least 10 minutes in duration over the course of a day are just as effective.

If fat loss is your goal, gradually increase your physical activity to 45 minutes a day or 10,000 steps. The best time to walk if you want to lose weight is immediately after a meal.