For many of us, Memorial Day is a three-day weekend filled with hamburgers, hotdogs, swimming pools, and racing. It marks the beginning of summer and bathing suit season. Spring is over; school is out; the pool is open.

But Memorial Day represents more than a three-day hiatus from work. While the traditions of Memorial Day date to the 1860’s, the United States Congress declared it a federal holiday beginning in 1971 for the purpose of honoring the men and women who died while serving in the U.S. military. 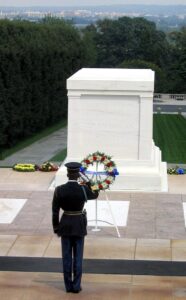 Most of us will spend a lot of time this weekend at parties, eating more than enough food, drinking some adult beverages, and getting lots of sun. Then there’s the race. It’s hard to ignore the Indianapolis 500 (the largest one-day sporting event in the world) when it’s right in our back yards. It’s not just an event. It’s a massive party that starts at 6 am and goes and goes and goes.

With so many parties, events, and celebrations, it’s easy to eat too much, drink too much, put on a few pounds, or even get sick. Too much of too many good things all at once usually leads to bad results. Putting on three to five pounds the first week of summer will make that bathing suit tighter than you want it. So, let’s talk about a few tips to help you enjoy a healthy Memorial Day weekend.

Memorial Day is a time to express gratitude and appreciation for the freedom we have. This year we’ve seen what liberty means as we’ve witnessed the war in Ukraine. We’ve also seen the atrocities of bondage and oppression.

The freedom we have in this country was paid for by blood of the more than 2.8 million Americans who’ve died in the line of duty, and the sweat and tears of the 45 million men and women who have served during a time of war for the United States.

As an American who enjoys their freedom, it’s important to take time to practice gratefulness for what you have. Showing gratitude for your freedom will strengthen your immune system, make you feel more alert, alive and awake, and bring more joy and pleasure to your life. Here are a few ways you can gratefully observe Memorial Day:

As Memorial Day became an American tradition, weekend trips and parties became part of the tradition to balance out the somberness of the day. And of course, racing has been part of that tradition for more than 100 years in Indiana. 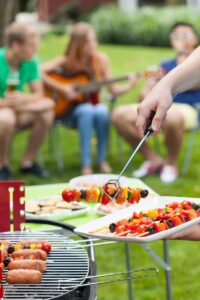 Whether you spend your day at a cookout or the race, make fresh, raw vegetables your top priority. If you spend your day at a party or tailgate, take a veggie tray as your contribution. Go for variety. Serve raw vegetables with tomatoes, cucumbers, broccoli, sliced red peppers, radishes, and baby carrots with hummus as a dip. If you grill out, make kababs with peppers, mushrooms, and onions.

Limit Your Time in the Heat

Memorial Day is typically the first time of the year many of us will spend a lot of time outdoors in the heat. It takes one to two weeks for your body to become acclimated to the heat. Heat acclimatization is the improvement in heat tolerance that comes from gradually increasing the intensity or duration of work performed in the heat.

Your ability to sweat is your body’s most effective cooling mechanism. After 10 days of heat exposure, your ability to sweat nearly doubles and becomes less salty so it can distribute more evenly over your skin. If you haven’t spent a significant amount of time outdoors in the heat, exercise caution on Memorial Day. That long walk to your seat at the racetrack could set you up for heat exhaustion. 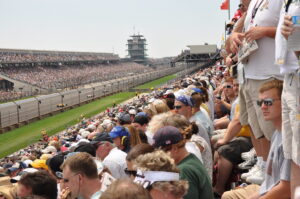 The average American consumes 3.3 alcoholic beverages on Memorial Day. Furthermore, 17% of men and 11% of women binge drink on this holiday. Alcohol doesn’t provide nutrients or fill you up. The calories are in addition to what you’re already eating.

Stay away from mixers filled with sugar like sodas, juice, and sweet and sour mix. Try using carbonated water and a dash of fruit juice to keep extra calories down. Most light beers have about 50 fewer calories than their regular counterparts. If you like wine, go for the drier versions like chardonnay or cabernet.

Also keep in mind that alcohol is a diuretic. It reduces the amount of vasopressin your body produces. Vasopressin is an antidiuretic hormone that causes your body to limit how much urine it makes. When alcohol inhibits vasopressin, you pee a lot more and can quickly become dehydrated. Not a good thing to experience during your first long weekend in the hot sun.

For every alcoholic beverage you drink, replenish your fluids by drinking a cup or two of ice water. This also reduces your chance of getting a hangover.

Don’t Linger Near the Food

If you stand near the food table, you’ll find yourself reaching for it even when you’re not hungry. A study from Cambridge University found the sight of food causes us to release hunger hormones, leading to false cravings.

When the food is served, fill your plate with vegetables, meat, and maybe some fruit, then get away from the table. If you linger within arm’s reach of the food table, you’ll likely reach for it without even thinking.

Enjoy the Day and the Reason We Celebrate

Hopefully these tips will help you enjoy your Memorial Day weekend in a healthy, responsible way. Get out there and enjoy the beginning of summer, but don’t overdo it and remember why we take time off on the last Monday in May.