What’s the Best Kind of Meat to Eat?

Meat can be confusing. It comes in all sorts of shapes, sizes, flavors and cuts. It can come from all over the world, or if you’re lucky enough, from your own back yard. It’s also controversial to the point that some folks think you shouldn’t even eat it. We recommend you eat meat, and specifically a certain kind of meat. Let’s dig a little to understand why. 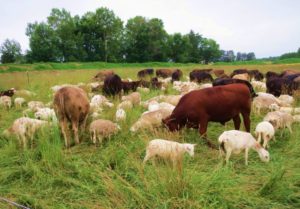 Humans are generalists who have been able to successfully inhabit every environment on the planet due to our ability to survive on an amazingly wide variety of foods. Our ancestors who lived close to the equator generally consumed more plants and less animal food, while those living in colder latitudes with fewer plants consumed more meat.

No matter where we’ve lived, meat from animals, birds, fish, shellfish and even insects has always represented 45 to 85 percent of the calories in the human diet. These meat sources provided significant amounts of protein and all types of essential fatty acids and vitamins.

Protein and omega-3 fatty acids from animal foods provided the energy necessary for the human brain to grow larger over the course of time. Our ability to hunt animals and cook their meat was critical in our species branching up and away from our mostly vegetarian ape cousins. Also, our ability to migrate to and inhabit higher latitudes and eat woolly mammoths depended on our development of meat adaptive genes. Like it or not our bodies have evolved for two million years on animal foods.

But there is a major problem with the animal foods most of us eat today. Our ancestors hunted and ate wild animals that were lean, healthy and happy, living in ways that allowed them to express their “physiological distinctiveness.” The meat that shows up at your local supermarket is typically fed in concentrated animal feeding operations (CAFOs) and pumped full of antibiotics and steroids. Cows are usually fed corn, which is a food they aren’t adapted to digesting very well.

Corn-fed beef is significantly less healthy for us since it contains more saturated fat and less omega-3 fatty acids than the meat from cows that are allowed to eat grass. But it’s not just the beef we eat that’s less healthy for us. The same thing has happened to pigs, chickens and even fish. And you can’t really blame the modern farmers. They are just trying to make a living and produce the products our modern food industry wants to purchase from them and sell for a huge profit.

The food we eat has changed more in the last 50 years than it has in the last 5,000. The food industry has pushed farmers to produce livestock quicker, more efficiently and at a lower cost per pound. As a result, livestock is often raised in confinement areas, with very little sunshine, and no opportunity for physical activity. The meat we eat is often given steroids so it will grow larger more quickly. Have you noticed the size of conventional chicken breasts lately? 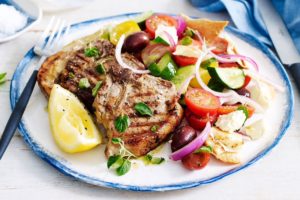 When animals live in an environment that allows them to express their natural behaviors and eat the diverse foods they need to be healthy, they don’t need antibiotics. And those animals also have a much higher vitamin profile than animals raised on conventional industrial farms. Cows that are allowed to roam in pastures and eat grass have five times more omega-3 fatty acids than corn-fed cows. This is mostly due to the fact that cows love to munch on clover, which is chock-full of omega-3s. Grass-fed beef is also much higher in vitamins A and E.

Pigs that are allowed to roam freely in a pasture will eat pretty much anything they can get their snouts into: roots, grass, leaves, grubs, nuts, berries, fruit and insects. They will also eat just about any table scraps that come their way. When pigs are raised in an open pasture, they typically have two to three times more omega-3s than conventionally raised pigs. The quality of the fat in pasture-raised pork is just better. And, when you’re eating bacon, quality fat is king. 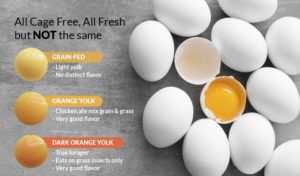 So, what’s the best way to find and buy better meat? Michael Pollan, author of In Defense of Food, says you should “Shake the hand that feeds you.” In other words, get to know the person who is raising your food. Go to farmers’ markets and buy food face-to-face from the people who produce it. Ask questions about how they feed their animals. Ask questions about the entire process. Know what you are eating and make the investment to buy the highest quality food you can afford—especially meat. If you are going to upgrade the food you’re eating, and you should, meat is the most important place to start. The quality of the meat you eat will have a bigger impact on your health than the quality of any of the other foods you eat.

A list of farmers markets in central Indiana can be found at indywithkids.com. Spend some time over the next couple of weeks visiting some markets in your area. Talk to the farmers, sample their food, and buy some of their meat.

If you want to go straight to the farmers, check out eatwild.com’s directory of Indiana farms that are producing grass-fed and pastured meat, eggs and dairy products. Several of these farms have delivery locations all over the state.

The best kind of meat you can eat is grass-fed beef and pastured poultry, pork and lamb that is antibiotic- and steroid-free. You’ll see significant improvements in your health if you spend the extra time and money to acquire this kind of meat, including improved heart function, lower cholesterol levels, reduced levels of bad fats, and an improved immune system.