January 19 was a big day. According to research conducted by Strava fitness app, most people have given up on their New Year’s resolutions by January 19. The study, conducted last year, tracked over 800 million user activities.

So that’s about two-and-half weeks into the year—not a very long time to commit to a big goal. The problem with most New Year’s resolutions is they are too big and too unrealistic. They usually involve changes that disrupt our normal lifestyles too much.

Socrates once said, “Excessive action in one direction usually sets up a reaction in the opposite direction.” That’s often the case with those who resolve to go on a diet or lose weight in the new year—two-thirds of people who go on a diet gain back more than they lost. 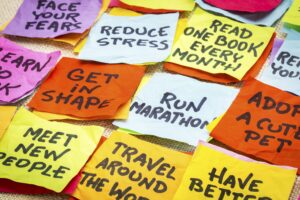 At Exercise Inc we’ve learned that making small changes and sticking to them over a long period of time can lead to lasting success in improving your health or losing weight. Achieving success at anything in life requires developing the right habits.

In 2006, a Duke University researcher found that more than 40 percent of the actions people performed each day weren’t actually decisions, but habits. They start as simple deliberate choices. One day you pull into Starbucks on your way to work: then three months later, without even realizing it, you’re stopping at Starbucks every day. Actions like taking a shower, brushing your teeth, or driving to work are behaviors you perform every day without even thinking. Habits (good or bad) are decisions that become automatic behavior over time.

While every habit in your life means relatively little on its own, over time, each habit—the meals you order, the way you speak to your spouse, whether you save or spend, how often you exercise, and the way you organize your thoughts—significantly impacts your health, productivity, financial security, and happiness. Habits define who you are.

The book The Power of Habit: Why We Do What We Do in Life and Business, by Charles Duhigg, outlines much of the recent research on habits. Duhigg says habits emerge because the brain constantly looks for ways to save effort. Left to its own devices, the brain will convert almost any routine into a habit because habits allow our minds to relax. The problem with most New Year’s resolutions is they require too much work. No matter how much willpower you have, you usually give up.

At Exercise Inc we help our clients live healthy, happy lives by coaching them to adopt a few simple habits they can live with for life.

In The Power of Habit, Duhigg explains how habits work in our brain. More importantly, he reveals the process by which a habit becomes a habit. By using what he calls a Habit Loop, we can take control of the habits in our lives.

The Habit Loop acts sort of like a computer program consisting of three parts: 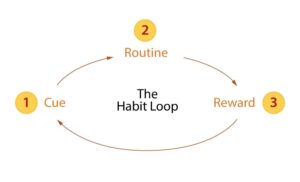 As we encounter this three-part loop over and over again, the process slowly becomes automatic. A habit really becomes established in your brain when the Cue and the Reward work together, forming powerful neurological cravings that compel you to perform the routine.

You can dramatically change your health and happiness over the next year by setting up a few habit loops to help you adopt some of our Simple 9© habits. Here are a few examples.

Let’s say you want to start the habit of drinking two cups of water first thing in the morning.

What if you want to stop eating every night at 7:00 pm?

Another great habit to start—walking 30 minutes every night after dinner.

These are just a few examples of how you could use Habit Loops to help you make some lasting positive changes to your life in 2022. Of course, you will choose different cues and rewards that work for you rather than what I listed above. But the great habits you need to adopt are just about the same for everyone.

Have patience when you try to start new habits. If you miss a day, don’t give up. Remember it takes about 66 days on average to start a new habit. It takes a lifetime to stick to a new habit.